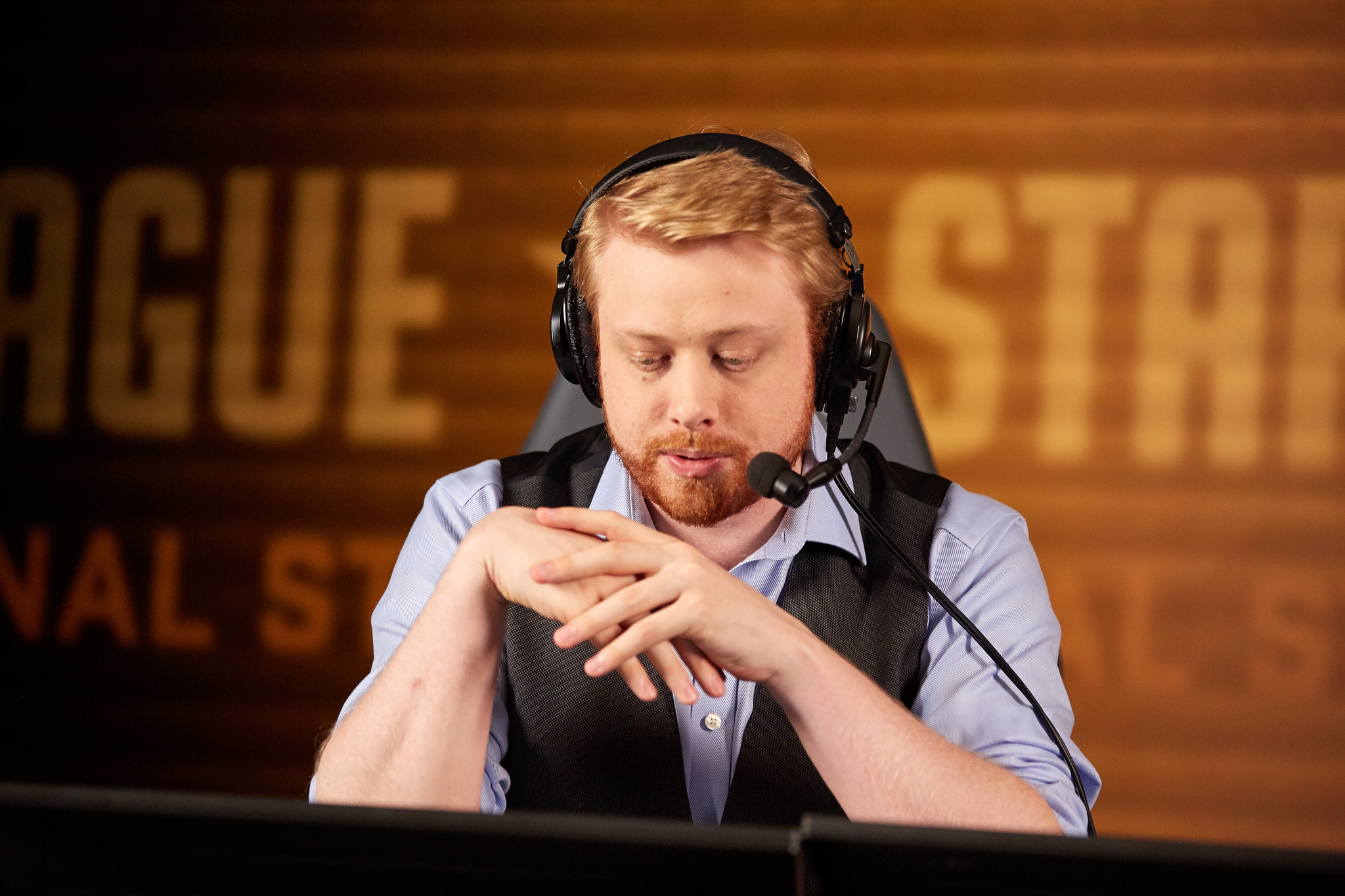 Being in the gaming industry for over a decade, Toby knows the ins and outs of the industry, and his deep knowledge pushes forward his bleeding passion for the esports scene.

I caught up with him and discussed many things, including his early casting days primarily in the FPS scene, how he transitioned into DotA2 casting, and what his general thoughts were on TI7.

Toby’s message is simple, yet meaningful — find something you have a passion for in life, and dedicate yourself to that; eventually, success will come.

You’re considered by many as the voice of DotA2 esports. With such a reputation within the scene, what sort of responsibility comes with that and how do you strive to better yourself as a caster each day? What techniques make you confident in your ability?

I believe originally I was seen as the ‘voice of DOTA 2’ but that was back when there were less play by play casters & I was covering most of the major tournaments.

These days we have amazing talents in LD, OD & Cap that bring a very unique and desired flavour to the casting which definitely remove the need for a singular voice for a game.I am not confident in my ability at all, in fact I can get thrown pretty easily if something going horribly wrong.

I instead just try to put all of the expectations out of my mind and focus on having fun with what I do, I find I have done my best casting when I have achieved that.

From humble beginnings in Battlefield and Call of Duty, you’ve loved to cast whether it’s for a small group of friends, or the largest crowd in esports history. Where’d the passion come from, and what is the ultimate goal behind casting? In other words, at what point could you step back and look at your achievements and career and be completely satisfied?

If I ever was satisfied with my career then I am doing something wrong, or I would be dead. For me when I set out to find a career in gaming I had no clue what I wanted to do, came across esports and saw the ability to grow with the sprouting scene.

I hated the idea of limitations and esports felt like the land of opportunity for those that had the drive and vision, even now 7 years into working full time in the industry I still believe that is the case.

What’s so special about DotA2 that made you love the scene and game as a whole?

Seeing just how much this game mattered to the crowd, the level of passion and depth that came with it I couldn’t help but get hooked.

Who do you look up to in the scene? What’s your story about how you came up and who was your mentor? Well over a decade later, who do you see as the best in the business, both in DotA2 and outside the scene?

A mentor in the DOTA scene was a hard thing to find, mainly because I was at the top and became the mentor and inspiration to other casters. Time has of course brought forward more talent and I think one of the greatest talents out there is LD.

Not just for the fact that his casts are consistently well structured but for his ability to juggle commentating with such a successful community project as BTS [Beyond The Summit] is.

Bouncing off the last question, who impacted you the most in your career?

When I look at who impacted my casting I well mention a few quickly but there are many I draw on:

Richie Benaud — Great Australian cricket caster, is was his structure of a sentance and timing that I loved a lot.

Ray Warren — I watched a lot of NRL as a kid and it was always his voice that would make my hairs stand up at intense moments.

Daniel ‘Artosis’ Stemkoski — In my opinon he is one of the greatest casters in the world, it his ability to control the rhythm of a broadcast bouncing from knowledge to humor.

Do you consider what you do for a living a job you have a passion for, or a passion that just happens to be your job? Where would you be without casting?

I struggled with this question a lot during my 7+ years as a volunteer in esports, and then when I started getting paid for it you then also wonder if you deserve the money you are getting. The way I look at it now is that I was always working, it was just the battle to reach the point to get the respect the job deserved to be paid for doing it.

Calling this a hobby is not giving your role in esports the respect it deserves and in turn shows your view of esports as a non professional scene, which cannot be if we want to become mainstream and not just a side marketing show.

Any chance we’d ever see you casting other games in the near future?

I was always a multi game commentator, DOTA has just consumed my life to a point where I cast 1 game only. I am hunting for other quality games to commentate and there are a few I am looking at but want the time to be right and the quality of the content to be worth it.

What is your technique when it comes to keeping up with the game? What are your thoughts on the most recent updates?

I go event by event, so I will keep a general eye on what happens in the scene/patches but when it comes to doing my job what is required is relevant study, I am not an analyst so what is required of me is lighter than others in the scene so I am able to do burst refreshers before events to ensure my knowledge is up to date.

There was something massive missing in the last update, and his name is Techies in CM!

As with any esport, the game is dynamically changing to add excitement and balance to the overall atmosphere and mechanical structure. What’s your take on recent changes to the game being someone who was very vocal about improving tournament structure, and what would you change if you could influence Valve directly?

I actually made a reddit post which listed everything I would want to change about the tournament structure, about 2 weeks later Valve announced the new minors and majors system and the details were almost the same as what I requested. So I don’t feel like I need to influence Valve on much.

The future of DOTA 2 looks a lot better now for the chances, the only hope is the damage that was done by the previous system can be repaired in a way that keeps DOTA 2 in the top esports of the world.

In fact, I think in the last 6 months, Valve has started being more proactive in such things after what felt like a long time of stale experimentation with no success.

The future of DOTA 2 looks a lot better now for the chances, the only hope is the damage that was done by the previous system can be repaired in a way that keeps DOTA 2 in the top esports of the world.

You just came back from TI7, the largest esports event in history, with record-breaking attendance and a prize pool that would rival any mainstream sport. What does this mean for esports and its status among mainstream media? Will esports be a mainstream sport in the future, or do you see it always being a niche?

The TI prize pool has now reached a place where the only thing it benefits is the players; the bigger benefits are the appeals to the viewers with quality content.

To become mainstream you need a dedicated following that cares about the content coming out of the game, the prize pool is more of a bragging thing that people can use in their headlines now.

Having the perspective of trying to rival mainstream sport is counter productive, the better perspective to have is one of creating a unique product that no one has created before meaning you are not a rival you are a leader.

If you said we raised $20,000,000 which went into making the event greater this is something that I would be happy to talk about.

Give us some insight into TI7 and what you took away from the event, reflecting back on such a venue. What was the best part of it?

TI7 for me was the first TI in a long time where I didn’t feel bored, being able to cast more and having a great partner in syndereN I felt like I achieved more and had more fun than I have had at previous Interntionals.

It can be argued that the growth of DotA2’s scene from TI1 to present is one of the fastest and most powerful in video game history for a competitive gaming scene. Why do you think the game’s scene grew at such a quick rate, and what can be done to make sure it stays around for a long time, weathering the storm we see too often of games we love dying out?

If you look at the history of DOTA 2 you can see the way it burst into the esport world, using the established scene of WC3 DotA and then putting 1.7 million into a tournament it was of course going to gain an insane amount of momentum. This of course didn’t come straight away, as no one could follow TI1 in size of projects so it limped along until TI2 hit at which point bigger organisations were investing more heavily into the title.

That was the biggest growth time of the scene and it all stagnated from TI4 into the old Major system, which was Valves way of trying to counter the lack of consistency to the DOTA year. Since that time DOTA hasn’t done anything massive to set itself above the rest, merely running along side of the other Tier 1 esport titles.

For a game 6 years into its life in this version (DOTA 2) it is still doing very well, but we will face the challenge of making this game entertaining to new viewers as well as catering to the existing viewers needs.

For a game 6 years into its life in this version (DOTA 2) it is still doing very well, but we will face the challenge of making this game entertaining to new viewers as well as catering to the existing viewers needs. Without the new viewers/growth DOTA can been overshadowed by more new and powerful titles arriving in esports, this would result in the eventual decline of the titles strength….but you can never kill DOTA!

What is esports to you, personally?

esports is my home, a place where I can work on things I enjoy and build something unique.

What do you have going on in the future?

I have a few things in the works, my life is getting booked up heavily with the upcoming minor and major DOTA coverage but I am looking to get into show content consultancy and some other things which challenge my abilities.

What is a message you think everyone should hear?

If you want to find meaning in your life, find something you are passionate about and just work hard at that.